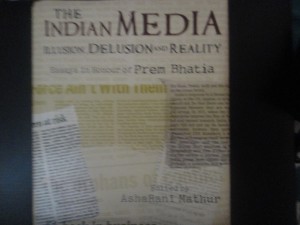 The book “The Indian Media – Illusion, Delusion and Reality” was delivered to me after I made 2 unsuccessful attempts to purchase it earlier. It contains a compilation of essays written by more 30 journalists on a variety of issues such as Environmental issues, Culture, Business and ethics, coverage of scams, broadcasting in India. In the choice for news, Print versus Television by Alok Mehta , there are interesting statistics like the total number of registered newspapers in India was 55780 and the total circulation these newspapers was 142 million.(these are likely to be 2005/2006 figures) .

In Media, Business and Ethics,  Sucheta Dalal writes that in India, companies and even government agencies, control journalists who dare to tell the truth through a combination of exclusion, character assassination or complaints. If you are an online publisher or blogger, this is particularly important and is a reflection on the freedom of the press in India .
The Press and Proprietors , though written by Prem Bhatia in March 1994, is still relevant today as it looks at the tradeoff between profits and the influence the media has.

A good read, I wish I had read this book a year or two ago.